The prestigious Dutch magazine SEASONS described the Christmas collection offered by My Poland online store and inspired by Polish folk art. The editorial dedicated to the Polish tradition of Christmas decorations appeared in the best seller Christmas edition of the magazine. It is an important promotion for Polish handicraft.

SEASONS is the biggest lifestyle magazine in the Netherlands. It is published eight times a year in over 100 k copies. The editor of the magazine has become interested especially in the unique collection of Christmas balls made in the découpage technique and decorated in colorful folk art motifs. It was a direct inspiration for the entire article in the magazine, which presents unique Polish traditions such as home decorating with paper cutouts or hand-made Christmas ornaments. 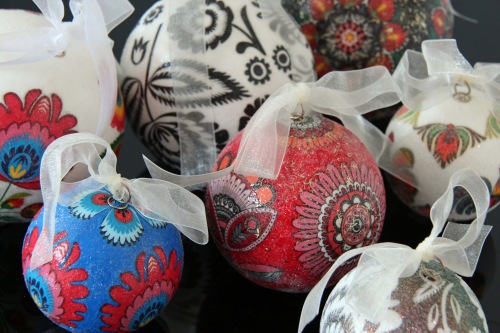 Here is what SEASONS wrote about our Polish traditions and our Christmas collection:

With her business ” My Poland ” Irena Bieguńska wears her passion for Polish folklore . She lets craftsmen create new ideas that are built on the rich Polish tradition . Thus, the paper art Wycinanki back into its collective balls “bombki”.

It was a window for Polish schools : Christmas decorations manufacturing

Polish folklore is characterized by elaborate colorful flower patterns . In dark times it was these decorations, that brought cheerfulness to homes. Many furniture were decorated in this way , but also walls, beams and even facades of houses in certain areas had flowery paintings . During the nineteenth century, another tradition also developed in Poland : paper cutting . The cutting technique , which is similar to the German ” Scherenschnitte “, was probably copied from the Jewish paper art. Housewives created cutouts using sheep scissors held by blades to use the energy of flexible steel. Quite sophisticated patterns had been created this way. “It is interesting that cutouts are made on the spot, without drawing a model first”, explains Irena Bieguńska from the Polish shop My Poland. ” They bought their paper from travelling salesmen and made cutouts in their own, individual styling”.

Especially in the Łowicz and Kurpie regions women became skilled in the folk art “Wycinanki “, literally translated “cutouts “. They were inspired by the nature and their imagination. Colorful flowers, cocks, peacocks and geometric shapes were represented. Sometimes daily rituals values were ​​depicted as feeding the chickens and driving horse -drawn carriage. The delicate figures were hung on walls and beams. So every scene told its own story . ” By the end of the year all the rooms were beautifully decorated ” says Irena .

With her My Poland Irena wears her passion for Polish folklore. She gives artisans the task of creating new products built on the rich Polish traditions. The paper art Wycinanki is partly reflected in its collective balls, “Bombki”. The decorative motifs are a tribute to paper art from Łowicz where decoupage was used with multi-colored paper layers stuck together . ” For centuries the Poles have paid much attention to the celebration of Christmas . In honor of it they valued home redecoration. Łowicz paper cutouts were one of the most important elements of Christmas decoration. Women made also chains of paper dolls. After the introduction of the Christmas tree, the garlands were hanging on the tree .”

See the original version of the article in SEASONS magazine