FOLK CERAMICS – FROM ANTIQUITY TO MODERNITY

Ceramics is one of the oldest handicrafts. Do you know that is has many centuries of tradition in Poland?

Ceramics is one of the oldest handicrafts. It have been developed all over the world. No wonder – pottery products were of practical importance – they were necessary in the everyday life. Gradually, folk ceramics took on the characteristics of art. The creators decorated dishes and gave them interesting shapes and forms. Although we all know perfectly the ancient Greek vases, few people know that folk ceramics have many centuries of tradition in Poland too. In this article, we want to introduce you to the most interesting products of Polish folk ceramics. 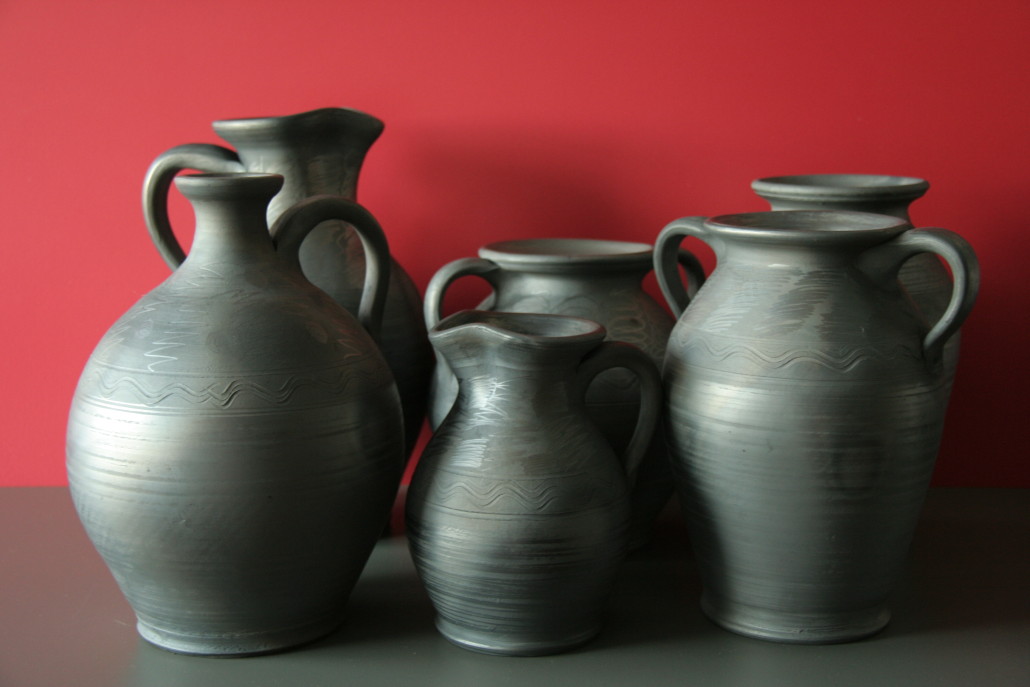 Gray ceramics – the oldest in Poland

The oldest Polish ceramics is gray ceramics, which developed on Polish territories as early as in ancient times – from 1300 BC. We wrote more about the history and method of making this pottery in our article “Polish ceramics as ancient as Greek?” 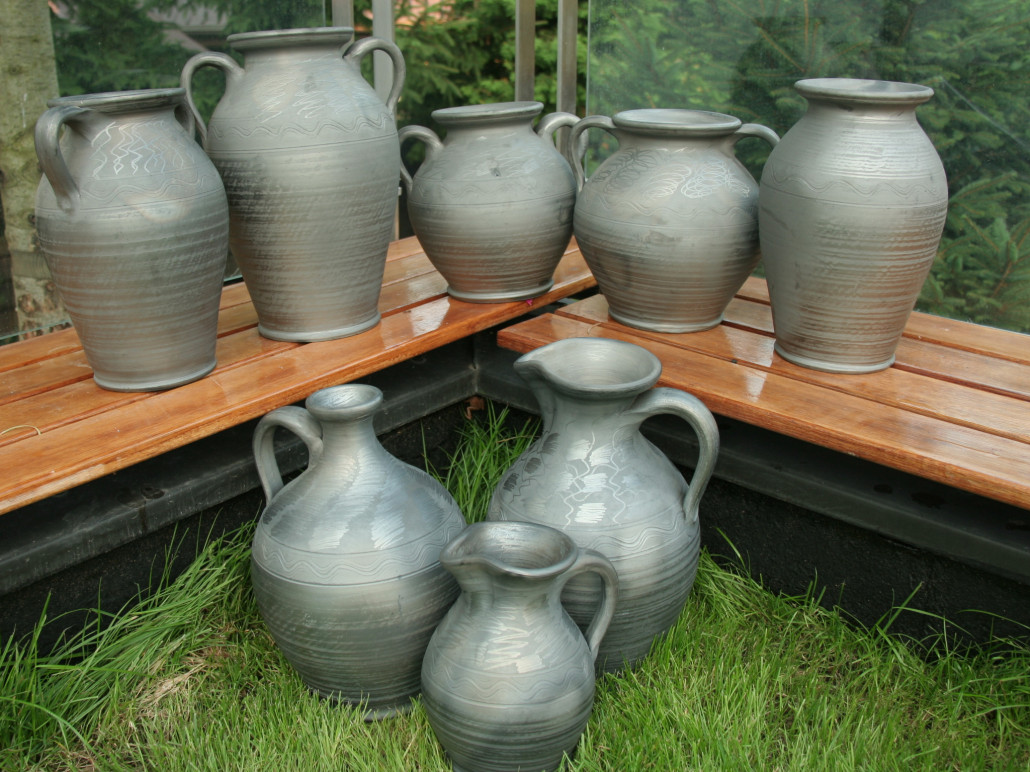 As we wrote in the introduction to this article, folk pottery had primarily practical function. The oldest forms of grey pots include vessels that were used to store and transport food.

The quine of grey ceramic “bunka”

One of the most interesting and at the same time the most difficult to be made forms of gray ceramics  is so-called “bunka”. It is a vessel with a characteristic bulge shape with a narrow neck. The form of this ceramic product is closely related to its role. “Bunka” was used to carry and store liquids and small seeds. People used to collect in such vessels water, oil, poppy, flax. Nowadays bunki delight us with their unique form. 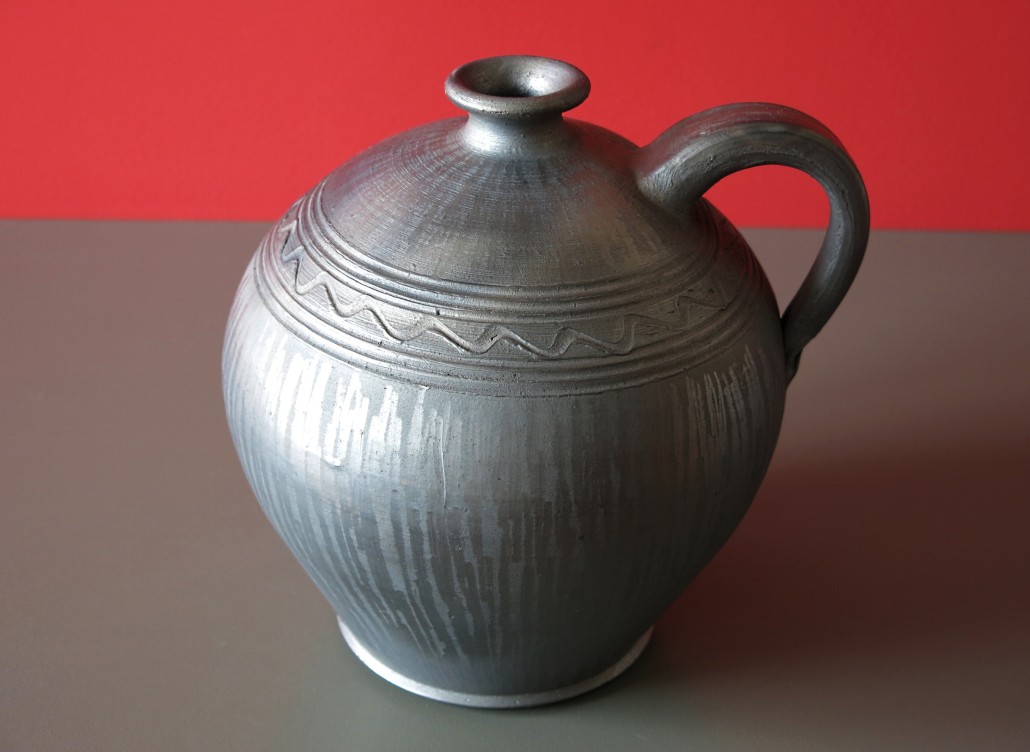 The twin-jugs were also very practical. This vessel is made of a combination of two small jugs and a handle that makes the vessel easy to carry. It was used to move meals to people working in the field. Two separate dishes allowed to carry two different dishes at the same time – eg potatoes and sour milk. Thanks to the handy handle and the symmetry of the vessel, it was easy to keep the balance and move the meal even over longer distances. Today, the twin-jugs can be excellent, for example, for serving on the table various snacks, or storage of nuts. You can also use them as a pot for herbs. 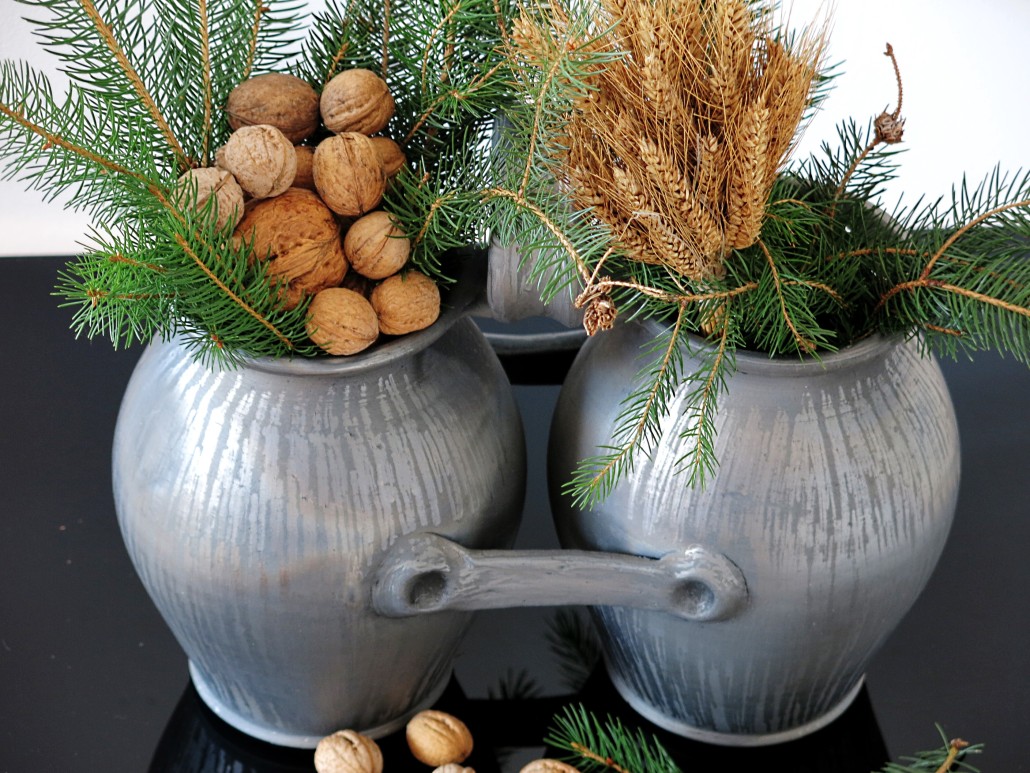 Another interesting form of grey ceramics is the so-called “Szabasowka” (the Sabbath vessel). The name of the vessel comes from the function it performed – it contained oils used in the Jewish tradition during the holidays. Also today, this pot  can be an interesting ornament – it will be perfect  e.g. as a vase for flowers. 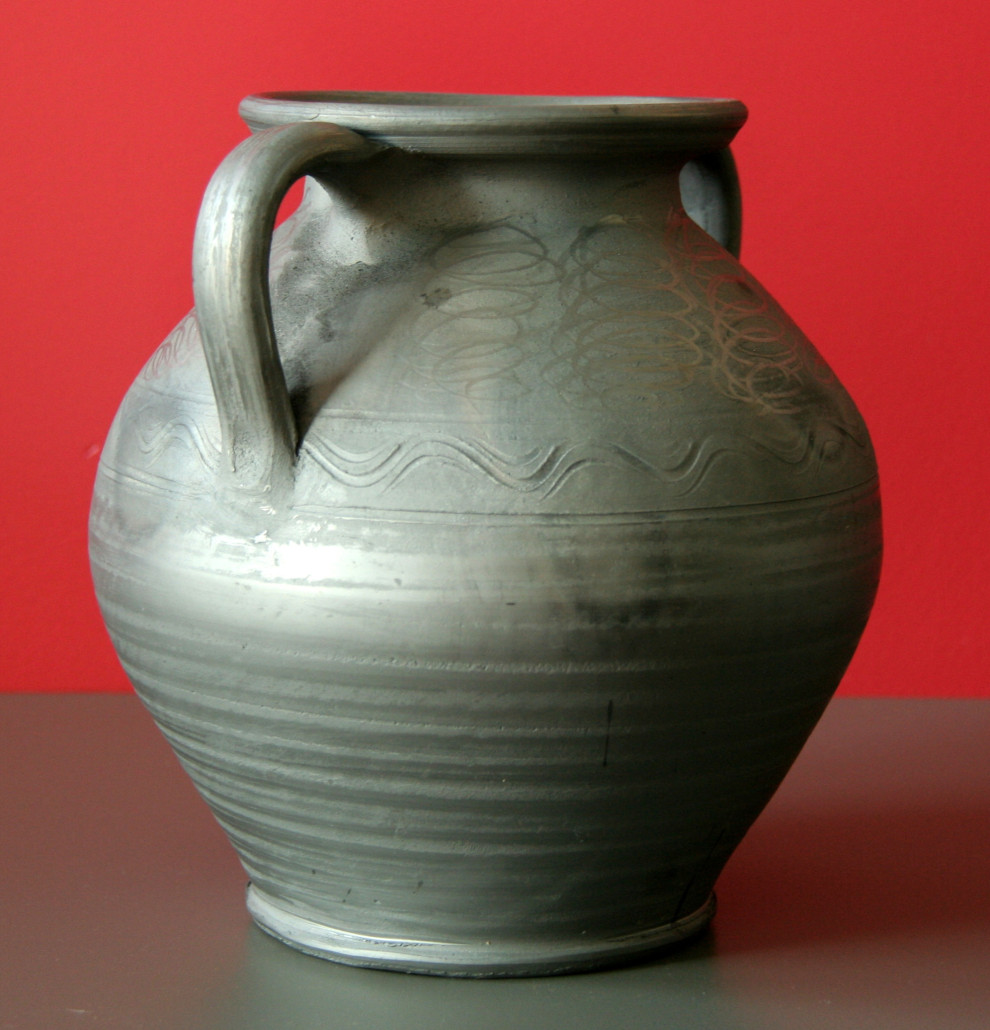 Kashubian ceramics belongs to the so-called glazed ceramics, which gradually replaced gray ceramics in Polish lands. Glazing enabled not only to obtain an artistic effect, it also increased the tightness of the vessels and their strength. In the past, pottery was a popular activity. The revival of this craft in Poland took place in the 19th century. Today, unfortunately, the traditional workshops of Kashubian ceramics have survived only in a few places. Our products come from one of such family workshops, founded in Chmielno in 1897. 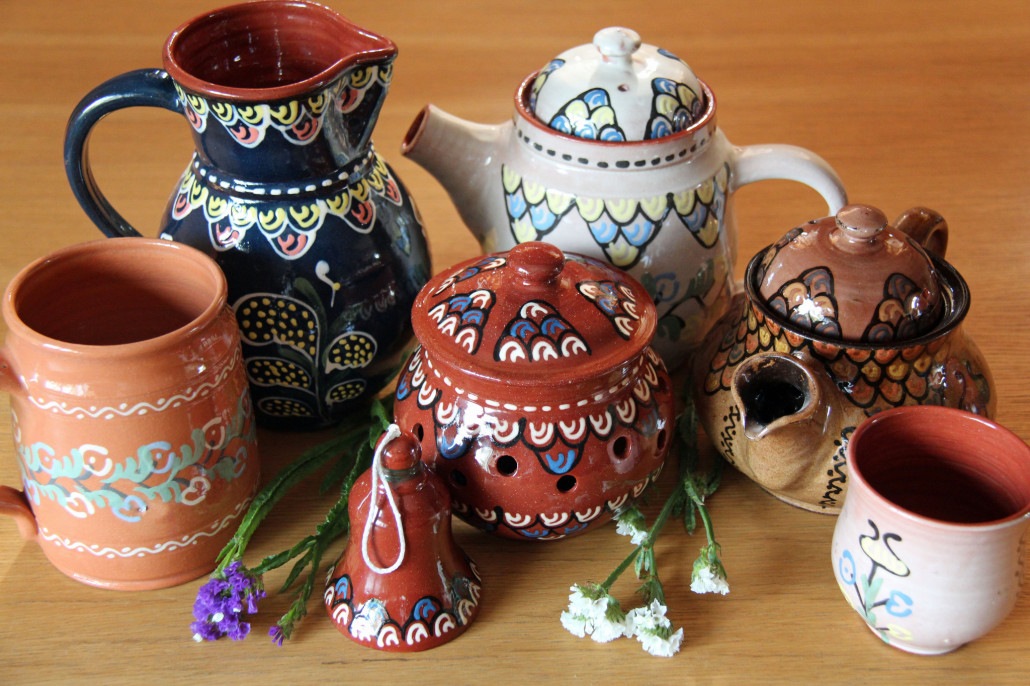 A characteristic feature of Kashubian ceramics is its color. Traditional colors are obtained in a natural way thanks to the so-called “slip” – a liquid, delicate clay suspension,  to which various metal oxides are added. Depending on the ingredient added to the clay, white, brown, yellow, green or navy blue colour is obtained.

An important feature of Kashubian ceramics are its decorations. They are composed of traditional Kashubian patterns, which can also be found in other fields of handicraft from this region – among others in Kashubian embroidery. In the Chmielów workshop, the same designs, unchanged for years, have been used for many generations:

Individual patterns are often combined with each other, creating original and decorative compositions. 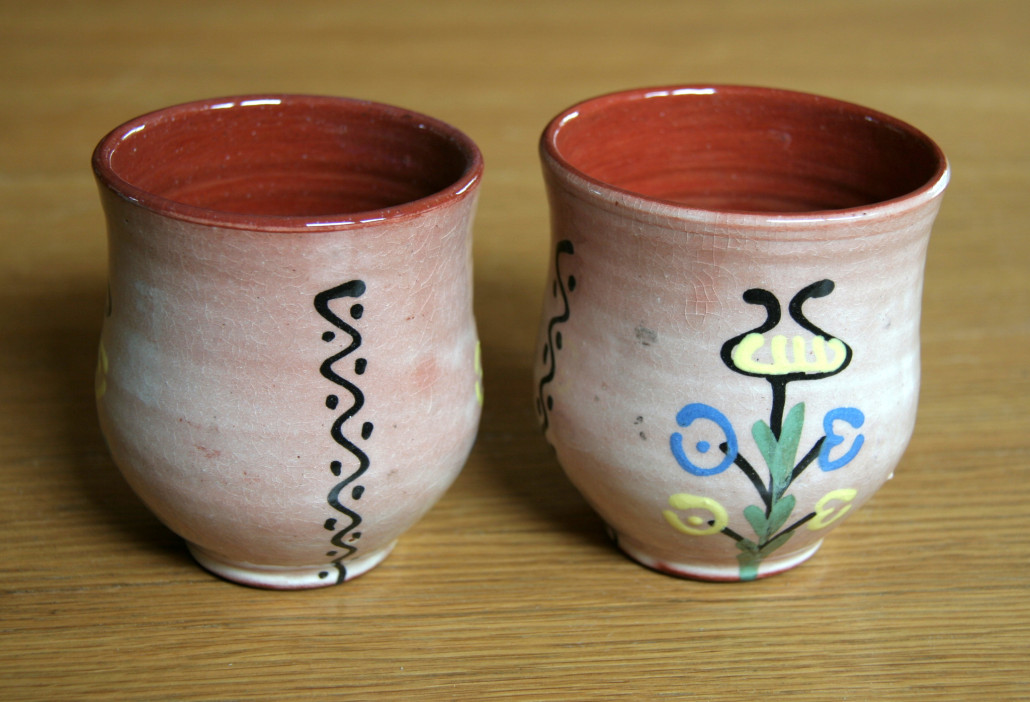 Kashubian ceramics – more contemporary forms of cookware, for domestic use

Practical use of the dishes

Among the products of Kashubian ceramics, we can not find such ancient, reminiscent of Greek vases, forms as in the case of gray ceramics. Perhaps because this ceramic was created in a much later period. Similarly to the case of siwaków, most vessels have practical significance. Also in this form of ceramics, we find twin-jugs. 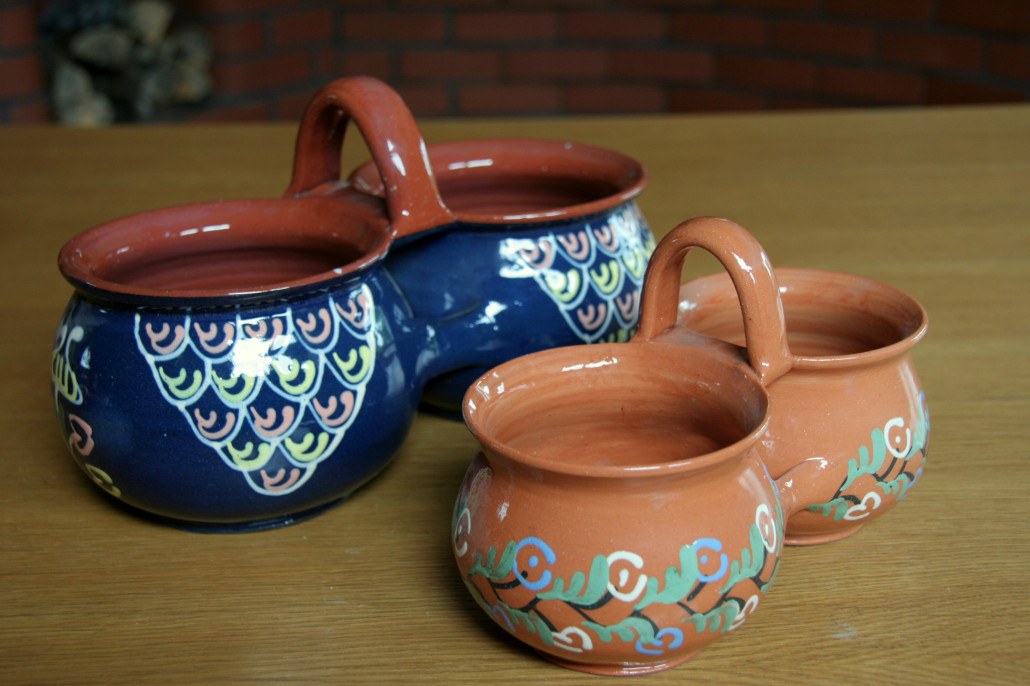 All types of bowls… 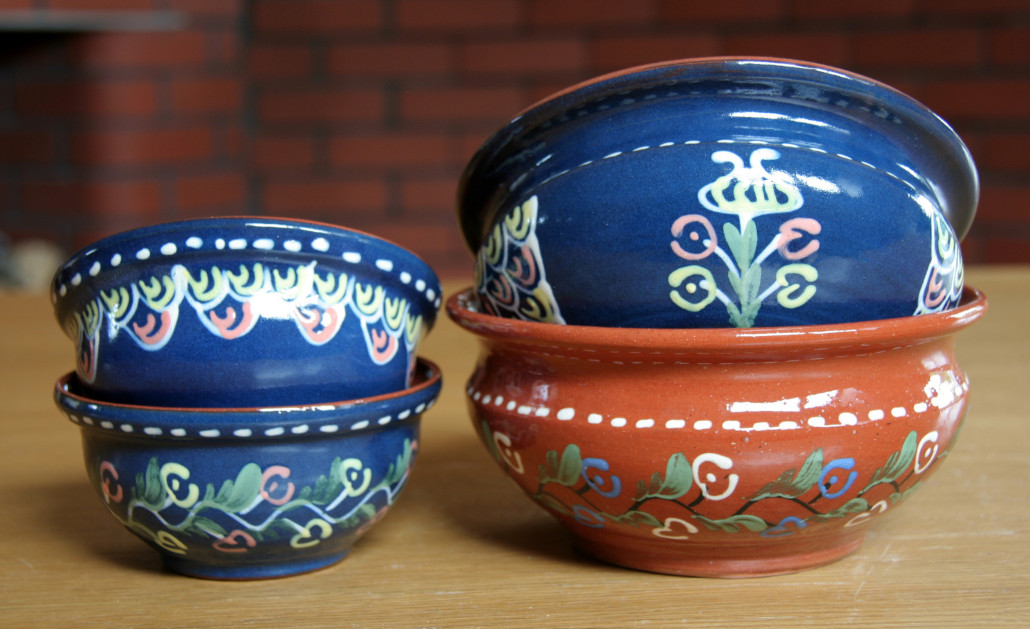 and pitchers are also popular. 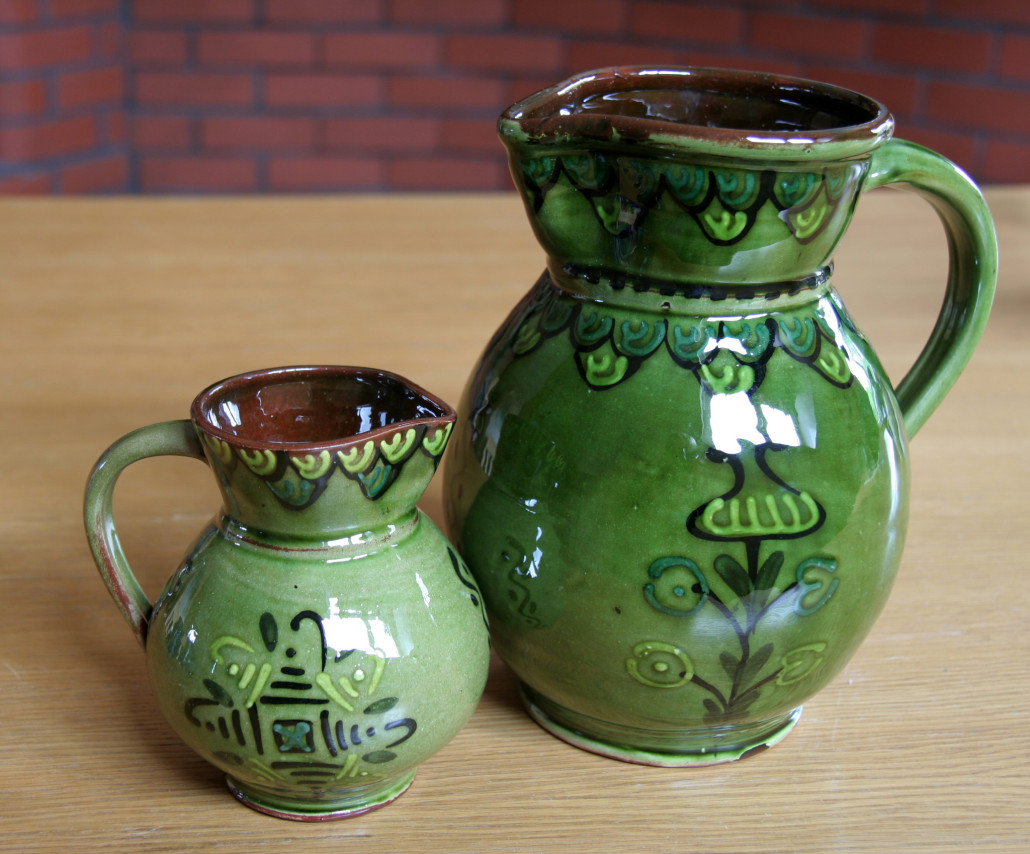 Among the products of this ceramics there are also products such as candlesticks and decorative bells. 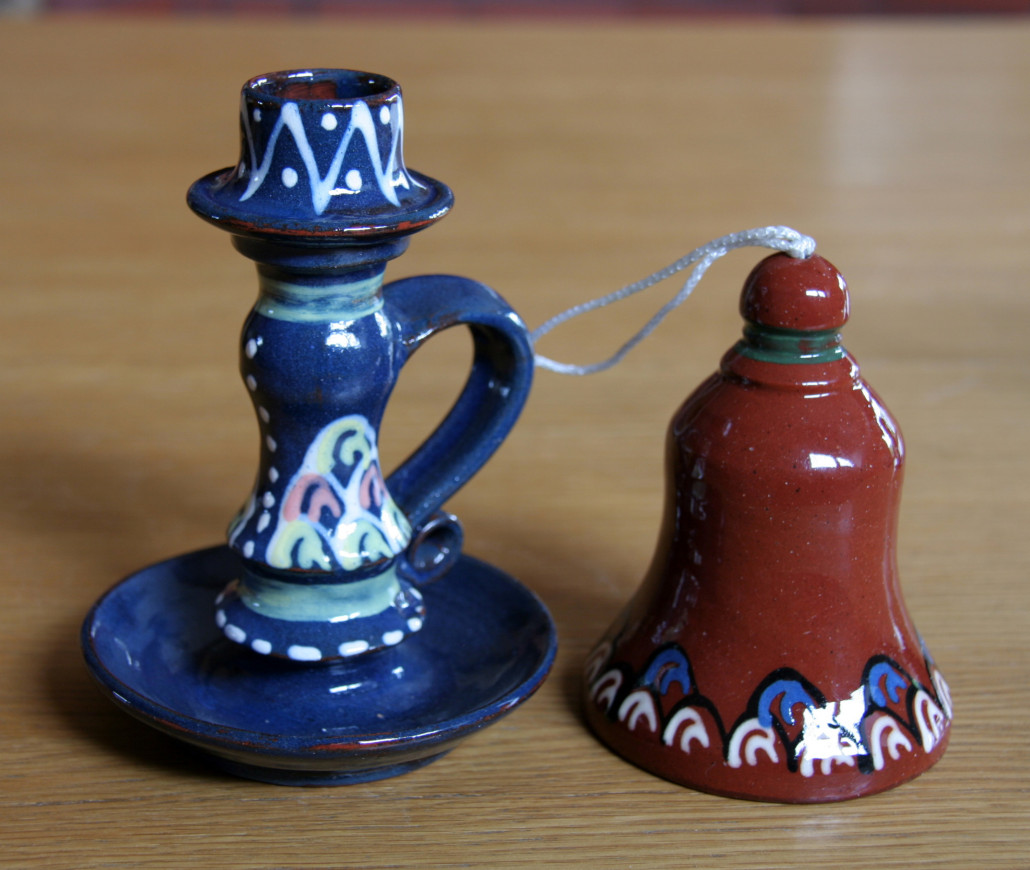